A downloadable game for Windows, macOS, and Linux

This is a demake of @superdupergc's Tron-inspired hacking FPS, Black Ice, made because he was threating to sell floppies at @GaymerX with nothing actually stored on them.

You can get the real version here, which is worth checking out (and it's also on Steam!): http://superdupergc.itch.io/blackice

Yes, I actually have his permission to release this on my page.

Note, this game is for MS-DOS, OR an IBM-compatible with the 320x200 256-colour VGA/MCGA mode and some way to boot off a floppy or floppy image (El-Torito, anyone?).

It has been confirmed to work in FreeDOS ( @superdupergc tested it himself and confirmed that it does work on real hardware).

The platforms listed are just platforms I know which have a version of DOSBox (which also works). QEMU also works just fine (it uses the bootloader).

This game is Open Source! Like, really! I'm not just saying there's source code, it's actually MIT-licensed! So, here's some suggestions.

But of course, what you really want to do is just steal the bootloader, because that took about 2 hours of fiddling and swearing just to get working. It loads the first *.CO* file it finds in the root directory and runs it, although currently it's limited to 16KB. (TIP: If you increment ES instead of DI, you can raise this limit to nearly 600KB.) 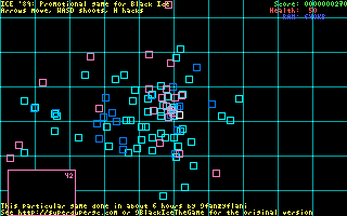